How long do you cook bacon in an Actifry?

The sharp, sweet and satisfying taste makes bacon one of the foods cherished by a lot of people around the world. Many people did not even know that they could prepare their favorite meal of bacon in an air fryer.  Some air frying enthusiasts however have questions like for how long do you cook bacon in an actifry. This article will give you an understanding of what cooking bacon in the Tefal Actifry looks like as well as how you can cook bacon in an actifry for those who are new to this.

Cooking Bacon in an Actifry

As with cooking any other thing, you’ll first have to gather the bacon to be cooked laid out near the air fryer. You will then have to consider how thick the bacon is. Depending on the size of your own air fryer, most air fryers will contain about four bacons if those are thick or up to ten if the bacons are thinly sliced. After you get all of this ready, you’ll then switch on the air fryer and preheat to 200 degrees. 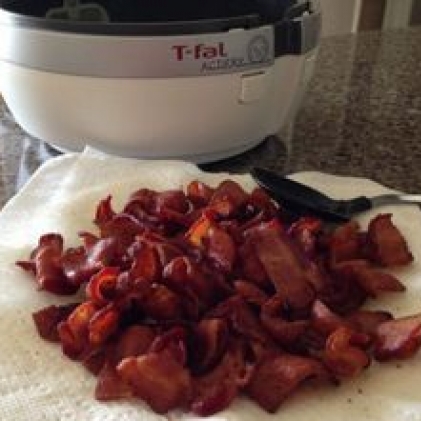 Cooking bacon in an actifry will take you somewhere around seven to ten minutes. Regardless of how thick all or some of the bacons are, your cooking time would normally not exceed ten minutes. If you’d be cooking more rounds, you can then repeat the process until you’re through cooking all you want.

One of the most common problems people encounter while cooking bacon in actifry and other air fryers is the way it looks after it has been cooked. While the bacon may seem different to how you’ve been seeing it cooked, a number of reasons may cause this. One of these is undercooking. Undercooking your bacon will make it look steamed. However, you’d also not want your bacon to get burnt from overcooking. You should stop the cooking process as soon as you begin to notice blacked and burnt areas on the bacons.

When prepared very well, your bacon should have a crispy outer layer and a crunchy interior that is hard to find when using other methods of cooking. You should also know that you have may have to make a few trials and errors before you finally get cooking bacon in an actifry right. We’ve all been there and after some practice, you’ll definitely figure out how it works best for you.

You surely know how delicious a combination of bacon and fries could be. Your actifry can also be put to good use to prepare this delicious but healthy combination.

Ingredients you’ll need will probably be about two to three potatoes, a standard package of bacon, salt and seasoning to taste or probably a tablespoon of oil.

Cooking time is probably around 50 minutes but you’ll have a perfect meal if you follow the guide below.

First, slice the bacons thinly and put it into the Actifry. Remember the bacon will usually cook with its own fat and so you don’t need to add oil at this point.

Cook the in the Actifry until you start to notice the brown outer layer and the bacon has released quite a lot of grease. You can decide to slice the potatoes while the bacon is cooking.

After you’ve sliced the potatoes and the bacon has cooked properly, stop the Actifry, remove some of the grease and place the potatoes into the cooking basket to cook for 30 to around 40 minutes.

Sprinkle your seasoning on the fries and let it cook for five to ten more minutes. You now have a combination of bacon and fries that tastes as good as they are healthy. Enjoy!